Every year, on September 22 the World community celebrates - Day without a car.

No need to reinvent the wheel in order to maintain a healthy atmosphere!

In recent years, many of us have noticed the rising number of cars in the city. It has become difficult to breathe, especially in the afternoon and evening hours. And when there are a lot of cars and a little greenery in the city, you do not feel yourself healthy and full of energy. These two factors, and attributes of our cities has an extremely negative impact on the population. It would be much better if there were a lot of trees and greenery, and few cars, but it would be even better if majority of cars would be  environmentally friendly.

The number of machines has risen in several times. How many people, who travelled by car before, use bicycles as a mean of travelling nowadays? But if you think about it, it is quite possible to sit on the bike and make it an everyday mode of transport to get to your work. And how it positively affects on our health and mood.

So what gives you the bike? Firstly, when a person rides a bicycle not only his feet work but also his hands, back, abdominal muscles and the neck works too. With intensive driving blood circulation increases, the tissues of the body saturate with oxygen.  After a decent ride health and mood improves much, and you get a charge of vivacity enough for a few days.

Secondly, the change of activity impacts greatly, namely the change of activity is called relaxation. Also biking allows you to escape from the routine processes, repeated day after day at work, in the car and at home in family life, of course, if your job is not related with the bike, such as a postman in some cities and countries.

The third is obviously positive aspect - the correct, high-quality use of leisure time. At close range the bike is a great alternative to the car, but in our country  the infrastructure for getting around the city by bike has not developed yet and the same for the safety of the parking space. 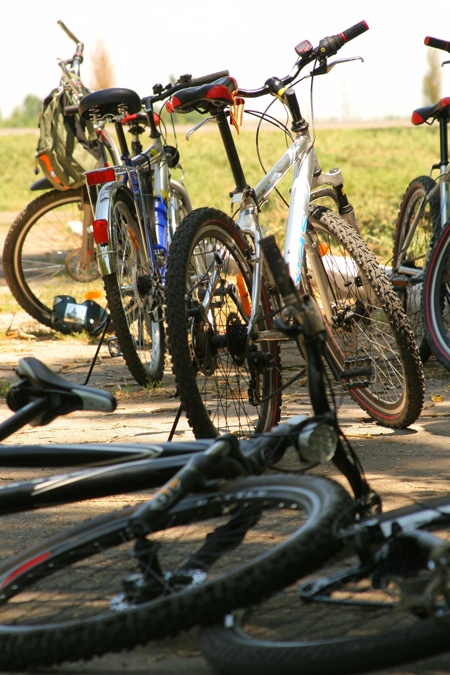 In addition, the bike can carry good economic benefits appart from the contribution to the environment and human health.

Is it good or bad for the economy and people that cars have become more? The answer is - it is bad in both cases. It would seem that the demand for cars is growing continuously, the production is rising, sales are growing and that should be good for the economy, but this growth has a drawback.

The more cars, the more the production of transport fuels, the more fossil hydrocarbons and all this leads to greater emissions. And if we talk about nature and man, they have long needed to be protected from over-tech daily life of the modern world. People and the environment began to suffer more from the vehicles, and this does not help the economy.

Supporters of the current way of claiming that a cyclist- is a disaster for the economy.
After all, the cyclist:

In a nutshell, the economy does not need healthy people. They do not increase the GDP. This view is fundamentally not true.

What does the figures on the experience of promoting and using the bicycle among the masses show?

Director of the Center of Environmental and Natural Resource Economics, at the National Research University Higher School of Economics in Russia Georgy Safonov, speaking last year in  the conference in St. Petersburg, the following data appeared: in England, the decrease of the peak roads  saves $ 0.4 per kilometer and parking cost savings - up to $ 3 thousand per year. The benefits of reduction of pollution (emission of ozone, CO2, particulate matter, noise, and others) - up to 10 cents per mile of travel for a cyclist. Bicycling is the most convenient mean for traveling over short distances (up to 20 minutes), while it takes up to 18 - 20 times less area than a car. According to the calculations of the Dutch architect and urbanist Markus Appenzeller, bicycles annually brings to the budget of the European Union 200 billion Euros.

Technological culture of mankind made a strange  turn. Bicycle from the poor mean of travelling became a symbol of the high civilization of a society.

There is a reason

The initiative group of the GEF SGP/UNDP in Uzbekistan with the support of the Federation of extreme and mountaineering tourism in Uzbekistan, the Khokimiyat (Municipality) of Tashkent region, Tashkent Regional Committee for Nature Protection, the Council ECOFORUM NGOs of Uzbekistan, sponsored by Fitness Centre O-zone/ Business Centre Darhan and, of course,  participation of cyclists- volunteers decided to extend the celebration of this day and celebrate it in their own way.

Attention to all fans who wish to twist pedals and brains!

You have a great opportunity to have fun and win prizes!

VELOKVEST game will be held in Tashkent.

VELOKVEST - is  an exciting game with elements of orienteering.

The aim is  to popularize the bicycle as an environmentally friendly transport, a source of human health and the environment.

Participation in the game is absolutely free.

Anyone can participate adult citizen of the Republic of Uzbekistan.

In total 8 teams are invited to participate. Maximum number of participants in a team - 4 persons. The team must be formed, and should apply for participation until October 7, 2015. The application form can be downloaded here.

The organizers of the games will prepare a waiting list, which will be made for the teams who sent their application later than the  eighth team. In case of refusal to play or absence for a briefing by one of the registered teams, the first team on the waiting list will be included to the game.

In order to successfully participate in a game the skill of riding fast will not be enough. The main focus will be on knowledge, ingenuity and team cohesion.

To play the game, volunteers will help us. At any moment, the member who is unable to cope with the route due to health problems can retire.
To participate in the game, you must do the following:
1. Form a team of 4 people
2. The team captain must send your request to: veloquest2015@yandex.ru
3. The application must specify the name of the team, the names of participants, date of birth, contact phone of the team captain. The application form can be downloaded here.(необходимо разместить ссылку сюда)
4. Each team should prepare a written and personally sighned receipt from each of participant, that all participants are familiar with the rules of the road and know the rules of road safety; also that they are acquainted with the rules of the game and  agree with them; assume personal responsibility for health and physical fitness. All receipts should be given to the captain of the team for their subsequent transfer to the organizers at a press briefing. Form of receipts can be downloaded here.(необходимо разместить ссылку сюда)
What are the requirements to the participants?
1. Have or at least take a bicycle for the day and be able to ride on it. Maybe participants will be able to take a bike for rent. But you can find a bike and take it for a day from your friends as well.
2. Know the rules of the road, especially with regard to cycling. You can find the rules of the road here.(необходимо разместить ссылку сюда)
3. According to the SDA Uzbekistan: 27.3. Bicycles must be equipped with an audible warning device and have the brakes. At night and in low visibility bike should be equipped with a lantern in front of white rear - lamp reflectors, or red, and on each side - reflectors orange or red. For violation of the PDP Uzbekistan team receives penalty points.
4. It is also recommended that all participants have a helmet, which must be on the head of a participant during the entire game. The team gets bonus points for safe cycling helmets.
5. Each team must have a fully charged laptop, tablet or smartphone with internet access. Furthermore, a particular device must be able to operate with the archive files.
6. Each participant must have a flask with water.
7. Each participant must be physically fit and prepared. Please be serious in this matter. Each participant takes personal responsibility for their health and physical preparation for the game.
8. We repeat! Only adult citizens can take part in the game. You must be at least 18 years in order to take part in the game.
9. Be responsible for your health and for your participation in cycling game. Organizers do not take responsibility for the particioants.

Hurry up, the number of teams is limited!

October 7 at 18:00 - the last day of accepting applications!

October 9th 19:00 - Briefing: a meeting with the team captains, announcing the venue of Velokvest, familiarity with the rules of the game, receiving receipts from the teams, the casting of groups.

Articles about past environmental games, you can read on our website:

/en/news/434 - The game objective - promotion of the bicycle as an environmentally clean source of transportation and health. Such activities promote the idea of walking and cycling modes of transport, use of public transport and the development of communities with walking distance of places of work and leisure.

/en/news/364 - Tasks of the game was on the theme - sustainable energy. The game consists in passing the different stages. Each stage had different tasks. From solving puzzles to collect solar furnace, where it was necessary to boil the water.