Each farmer in Uzbekistan has to follow a set of regular land cultivation practices for yearly production of agricultural crops. These operations have become routine and it is really hard to wedge into this settled order. But we should, if we want to stop further land degradation and to adapt to the unstable irrigation water supply caused by the ongoing climate change trends. The story below tells how a very simple and quite a realistic regular farmer’s practice can shift situation towards  more rational and efficient land and water use.

Most of problems with land degradation on irrigated lands in Uzbekistan (42,230 sq.km in total irrigated area)1  come from inefficient and excessive water use. Inefficient water application by farmers results in primary and secondary salinization of soils and their productivity loss. Thus, cutting down water consumption and better regulation of its application on field level will definitely help reducing soils’ salinization and further degradation.

On the other hand, Uzbekistan is a country which uses water quite heavily for its agricultural sector. Around 92% of Uzbekistan’s total water use, which is equivalent to 60% of all water use in Central Asia2, is used by agriculture. Because of high inefficiency of the irrigation system, conveyance loss stands at around 60% of total water withdrawn from the rivers for irrigation purposes. Only 30-40% of water finally reaches the fields, making water a scarce and highly demanded resource for the farmers and in particular during the vegetation season. Hence, any decrease in water consumption on various levels and increase in water availability will help both combating land degradation and ensuring availability of the scarce irrigation water to larger cultivated areas. This will eventually lead to a win-win solution.

The existing field management and field operation practices in Uzbek agriculture can and must be amended to alter the situation with land degradation and excessive water use but one should act one step at a time. The first innovative practice that the GEF SGP supported in this area and which turned out to be the least costly and easily adopted by the farmers was the practice of laser land leveling.

Laser leveling technology in the nutshell

This technique is well known for achieving higher levels of accuracy in land leveling and offers great potential for water savings and higher crop yields.  The laser leveling equipment allows smoothing the land surface making it very flat with a slight grade with a precision of ± 2 cm. Currently farmers level their fields with regular rough scrappers, which often results in the difference in soil levels of ± 20-25 cm. Traditional leveling thus leaves number of depreciations and elevations in different parts of the field, which will cause the uneven water distribution when irrigated and will demand excessive water use.  Depreciations have to be filled by water as well as extra water have to be used to water elevations. Laser leveling allows identifying soil elevations and moving the excess soil from elevations to the lower parts of the field. As result irrigation water covers the field evenly and up to 25% of water can be saved. All it takes to start using the technology is purchasing a set of the laser equipment (3000 to 5000 USD), mount a receiver on any tractor, modernize a scrapper a bit, get an easy training and go to the field.

Many of the farmers omit even rough leveling of the land surface considering it as an excessive operation without any value added. But majority of those who understand the purpose of leveling also do only rough leveling. Among more than 65 thousands farmers of Uzbekistan perhaps tens knew about the laser leveling technology and perhaps a few ever tried it. The technology has been widely used in road construction and other sectors but not in agriculture of Uzbekistan. This had been a situation before GEF SGP projects started.

Research on laser leveling technology adaptation and application in agricultural production of Uzbekistan conducted in the framework of the ZEF/UNESCO project – “Sustainable management of land and water resources in Uzbekistan”. The work on dissemination of this technology was continued by a successor of the project – NGO KRASS, which stands for Khorezm Rural Advisory Support Service.
NGO KRASS was the initiator that started spreading lazer leveling technology among farmers of Khorezm province. The GEF SGP project  originally envisaged to start with two Water Users Associations (WUA).

Photo of the field unevenly covered with irrigation water during the leaching event for washing out the salts from the soil. Some parts of the field are water logged, some are not covered with water The need for the precise leveling is predominantly neglected by farmers in Uzbekistan.

The idea of the first project on laser leveling was quite simple – GEF helps to finance procurement of laser leveling sets, NGO KRASS engages farmers from two pilot WUAs into testing of the technology on their fields, which are then used for demonstration and training of other in the community, letting them use the procured sets for two years in a row. At the end of this period laser leveling sets return to the NGO for their further distribution among other WUAs in the Khorezm region . Those farmers who have experienced the benefits of the technology are supposed to procure the sets on their own.

To facilitate self-finance of the technology application, the NGO KRASS during the project made a cost-benefit analysis of the technology in real terms for farmers so they could better understand their own potential benefits. They include:

But the analysis of the NGO KRASS also showed attractive figures that resulted in the interest in the technology by the province Governor office. The analysis showed that should certain investments be made for purchasing laser leveling equipment for a widespread use by the farmers in Khorezm region, they would be paid off already in the first year of operation. By the third year the province would have net additional profit in the amount of nearly 19 millions USD. Moreover, total water savings for irrigation in the region will reach 293.2 mln. m3 or 7.3% of total annual regional water consumption.

During first trainings. May 2010. Khorezm region

The project published a number of articles on the technology benefits and distributed it widely across the region and the country. A detailed manual how to adapt and use the technology was also published and widely circulated. In Khorezm region alone, more than 800 farmers went through a comprehensive training by the directive of the province governor. At this moment, more than 400 ha of irrigated arable land was laser leveled in the Khorezm region.

But this initiative did not finish at the boundaries of Khorezm. Specialists of  NGO KRASS were invited to conduct lectures in other regions of Uzbekistan, including Karakalpakstan, Namangan, Andijan, Samarkand, and Kashkadarya regions. After one of such lectures in Namangan region, located at another end of Uzbekistan, 1000 km away, a group of academicians also initiated a project on dissemination of the laser leveling practice within their region. Concurrently, farmers from the Kashkadarya region got interested in the technology and local Governor office supported the dissemination of laser leveling practice among local farmers. Yet another region of Uzbekistan – Karakalpakstan – also initiated and started a similar project. All with the help of UNDP Uzbekistan and GEF SGP. From the baseline of zero-knowledge about the technology just three years ago, more than 300 farmers in those provinces have learned about the technology and keep telling and showing their farmer-colleagues about its benefits. So does NGO KRASS, which has become the champion of spreading this technology in the country. 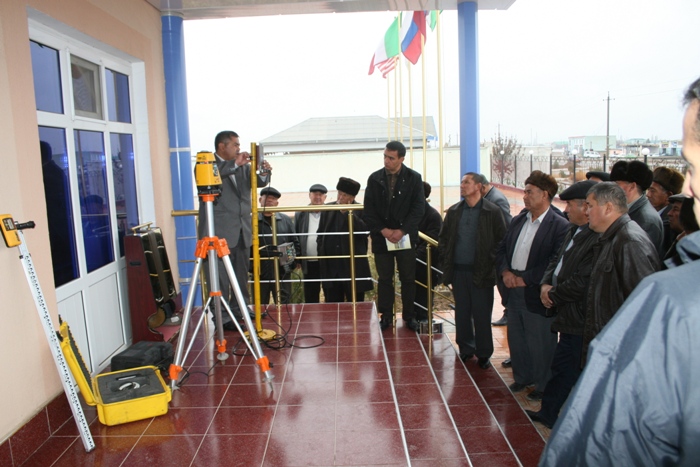 Farmers get to know about the lazer leveling technology for the first time in Kashkadarya province of Uzbekistan. 2012

There is a growing interest in the laser leveling practice all across Uzbekistan raised entirely thanks to the initiative of NGO KRASS, UNDP Uzbekistan and the GEF support. Farmers of the remaining regions find out about prospects of the technology through their Farmers Unions, delegates in the Parliament and apply for the dissemination of the practice in their respective regions. The GEF SGP plans to further support spread-out of the practice. A model business plan has been developed for farmers to purchase the equipment by themselves. Information on suppliers is widely shared. The plan is to cover the whole Uzbekistan with the practice so every farmer knows about the technology and start giving a serious thought of using it as a routine operation and eventually do use the land and water resources with more care and higher efficiencies.