Probably many of you know that the GEF SGP is broadly working on developing of Pistachio "forests" in Uzbekistan. It all started with a project initiated by the farmer from Jizzakh - Bastamkul-aka. The project was launched and developed very well. During the project realization we saw ourselves what benefits could be brought by the development of industrial plantations of pistachio. Here is a list of articles which would help you to recall the news about the project:

Seminar on planting the plantations of rarity pistachio


At the bottom of this page you can be introduced with the instruction on planting pistachio and economic analysis which will help you to see the benefits of growing this culture.

I put the word "forests" in quotes above, because our foresters call them properly as industrial plantations. But I want to believe that we help to restore the old pistachio forests in Uzbekistan even though they are artificial. By the way, my friend Igor Chernov invented a scientific name for the foresters - "silvatologists"

. Impressed with the work they do, he exclaimed: "Bird experts are called ornithologists, insect specialists are called entomologists... How could it be that there isn’t such a name for foresters?". And after finding out that in Latin the forest is "silva", it didn’t take him a long time to invent a new name - silvatologists. From now on, we call our foresters only in this way.

But let us go back to our project. Our work on promoting the planting of pistachio instead of occupation with livestock, or rain-fed agriculture, began to bring its benefits. Pistachio - is a culture that can grow on any marginal, arid lands and does not require watering. And it is very advantageous from the economic point of view. People who wish to grow pistachio appeared across the country. We continue this work and now another project is launched in Surkhandarya, in Kashkadarya, the projects are initiated in Ferghana region and Andijan. Our instructions and economic analysis were disseminated throughout the country.

But it is not enough just to create an interest. It is necessary to continue this work and to strengthen it. Local people showed their interest. Now we need to provide all interested farmers with everything they need.

The most appropriate way to create pistachio trees which are effective from commercial point of view – is grafting "wild seedlings" with improved breeding material. In other words, we must take the form of our local pistachio, which is most suited to our conditions, to plant it as a stock, and to inoculate with varieties that give good yields. However, this requires the inoculum. We need to take it this inoculum from somewhere, that is, we need a source. Such a source can be effectively operating stool bed, where inoculum will be produced. We don’t need just one stool bed, we need many of them. The growth of interest to the pistachios should be supported by the proposal of inoculative material, which we don’t have yet, or have in very little amount. Therefore it is necessary to have a stool bed of varieties and forms of pistachio that are suitable for cultivation in various forest areas of the country.

This is the reason for initiating this project. The draft was prepared by a group of silvatologists - Evgeniy Konstantinovich Botman, Galina Chernova (Miss Pistachio), Lucian Viktorovich Nikolyai and Timur Tulyaganov. The only possible place to create such stool beds of course had to be a Galyaaral base station of the Republican Center for ornamental horticulture and forestry (Center), which currently has a large collection of various types and forms of pistachios. It is this collection which will serve as a source grafting material with which a stool bed will be created, where in the future every farmer, forestry, any other person or organization will be able to buy the inoculum. 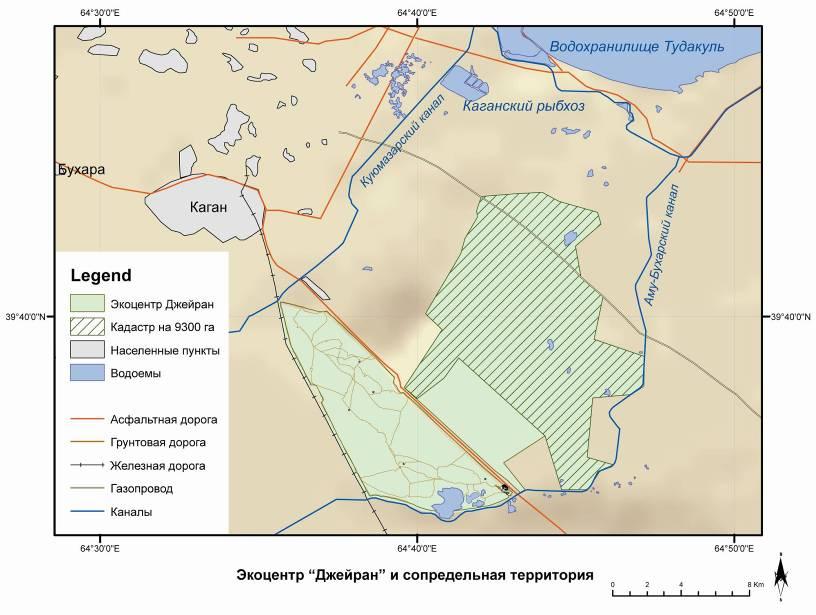 Herringbone pattern on the map roughly indicates the place on the map of Uzbekistan, where the project has been launched

It should also be noted that the project cannot be submitted to the GEF SGP by a governmental organization. Institute of Forestry could not become an applicant, and the trade union of the institute refused it requesting a charge of trade union members for the possibility of the project. It is a bit strange, considering that the project is being done to develop the base station. A chairman of State Committee for Nature Protection in Djizzak province - Kholmatov Erkin Ergashevich, who strongly supports the new initiatives that help people and the nature of motherland, helped the group of foresters. The applicant was a local community of citizens.

So, the first stool bed for production of grafting material is Gallyaral base station of the Republican Research and Production Center of ornamental horticulture and forestry (RRPC OHF). Currently the center has about 30 hectares of pistachio trees, suitable both for increasing the collection and the creation of the stool bed, and for the establishment of industrial plantations and is the most suitable place, if not the only place for creation of a stool bed. Currently, it is the only one in Uzbekistan and the largest collection site in the Central Asia by its varieties and forms. GEF SGP is working to create such stool sites across the country and we will be glad to consider the possibility of establishing such plantations. The idea for the Fergana Valley has already been received from Andijan province. 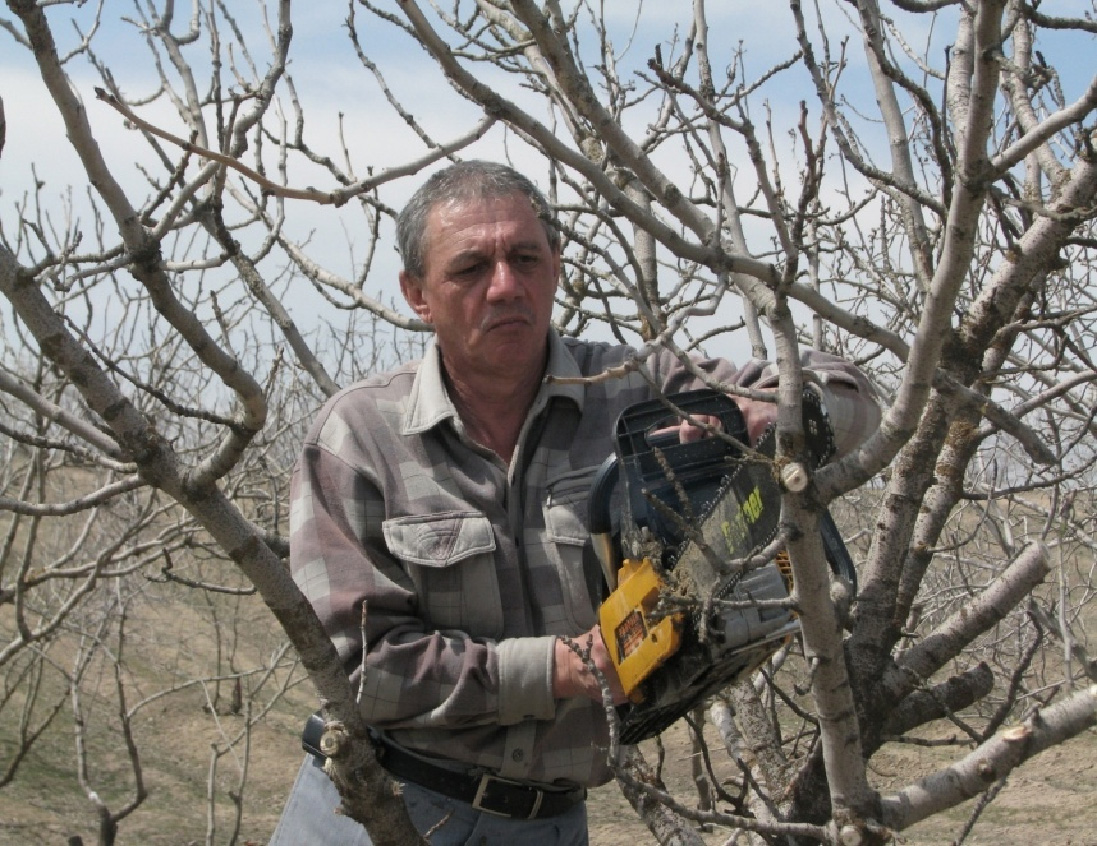 Honored silvatologist of the country - Eugeniy K. Botman, during cutting-back of the existing plantation for the subsequent creation of the tree for the production of inoculum

The project aims to create the stool bed of rarity pistachio in Gallyaral base station of the Republican Scientific and Production Center of ornamental horticulture and forestry in an area of 5 ha. This is the minimum amount. Taking into consideration the pace of the project, the result will be exceede and a large area will be occupied by the stool bed. The stool bed will provide inoculum by the nine varieties/forms of pistachios. A universal pollinator will be identified here for further distribution - the male tree, which will bloom in the possibly long period of time, so that to pollinate as many female trees as possible. Yes, pistachios has male and female trees. It should be borne in mind. Ignorance of this fact can often become the direct cause of deforestation:

For example, a local resident who does not know that there is a male tree, thinks - "We need to cut it down for firewood, why do I need it? It does not give any fruit." Then he cut it down. And female trees, which were dependent on male ones, stop bearing fruit too. Again, he thinks - "All right, that are bad trees! For some reason the trees become bad more and more. I also have to get rid of them because they do not give fruit." That's all. No forest anymore. And it happens because people simply do not know that those trees which do not bear friut are also important. And maybe a tree has a rest. Such trivial reasons may be a cause of big problems of deforestation. 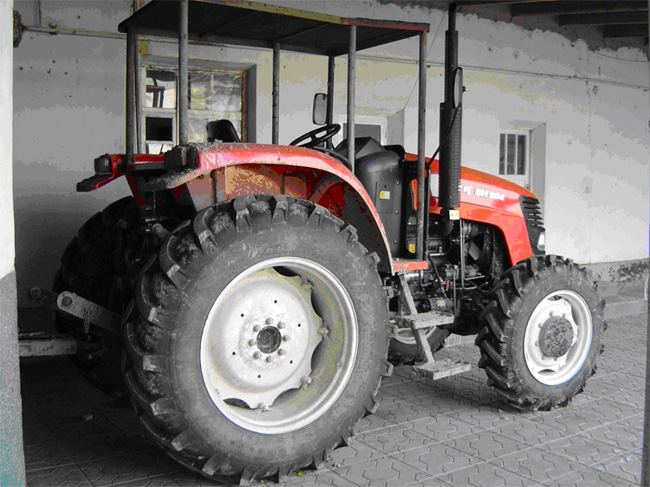 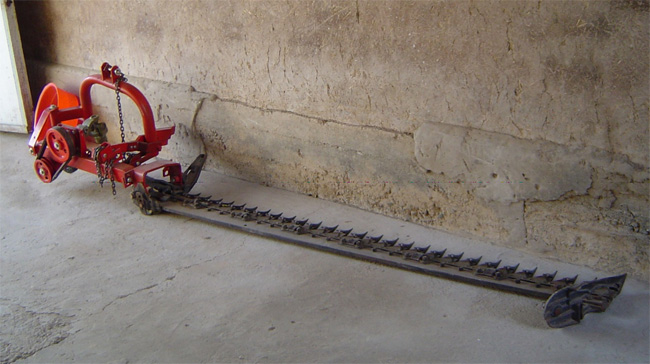 Forms, presented at the plantation will have a different flowering period and, consequently, maturation. They have different needs for water supply in order to offer certain varieties for various areas of Uzbekistan.

After completion of the project, this plantation will provide not less than 30 hectares of established pistachio plantations per year with inoculative material.

This summer a training on pistachio inoculation will be conducted on the plantation for interested farmers throughout Uzbekistan.