The project for conservation of biodiversity in Zarafshan reserve

The project for conservation of biodiversity in Zarafshan reserve
Completed project

What was planned according to the project?

Zarafshan State Nursery is intended to preserve the unique riparian woodland for future generations. This wood is really special. It seems to be the riparian woodland - it's the same everywhere. But it is not. Here the forest is other exactly. The unique community of Asiatic poplar, willow, sea-buckthorn, blackberry and other rare plants form a beautiful symbiosis that is home to many species of plants and animals, many of which are found only here. 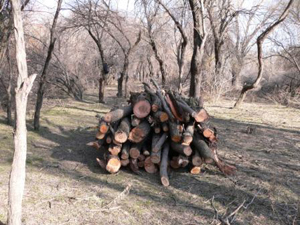 The staff of the reserve (Natalia Marmazinskaya, Alexander Korshikov, Maria Gritsina) together with Yoda youth Squad with the support of WWF worked long and hard with the local people for raising of their consciousness. But all was for nothing. The reserve is situated in the midst of human settlements, and most of nearby villages would like to get profit at the expenses of plundering the wildlife. The illegal deforestation of riparian woodlands, protected by the reserve, is the main threat to biodiversity of the reserve. And all disappears together with the forest.

After a detailed study of the problems and their causes, Samarkand Regional Environmental Center "TERRA", Youth Environmental Squad "YODA", together with the scientists of the reserve, came to the conclusion that the local population does not use the resources of the reserve to meet their basic needs. Penetrating the territory of the reserve, as the reserve is not guarded properly, they use valuable resources of biodiversity, just for additional free income that is not requiring any investments, while bringing steady income. Access is free, so you can take what you want...

This could not continue anymore. Due to the fact that the reserve is surrounded by a dense of ring of settlements, the creation of an effective buffer zone is practically impossible. The local population penetrates the territory of the reserve around the whole perimeter, driving on trucks, tractors, cuts down and takes away the valuable timber. Besides, the local population constantly carries out an unauthorized cattle grazing within the territory of the reserve.

To be clear and understandable, the project will do the following:

Measure 1: To restore the boundaries of the reserve, set by the law
Measure 2: To attach additional lands Djambay forestry, as well as the forest area between the bypass of № 3 and № 4
Measure 3: To increase the number and quality of the border name plates, to install entrance gates at four bypasses.
Measure 4: To deepen and expand the natural channels which are the boundary the reserve.
Measure 5: To make a ditch in areas where the channels are not available.
Measure 6: To erect a wire fence.
Measure 7: To erect a fence from clay blocks.
Measure 8: To crop thorny plants.
Measure 9: To hold a series of seminars with the local population.
Measure 10: Organization of scientific - educational excursions and holding of environmental protecting actions on the basis of Zarafshan reserve.
Measure 11: To improve the skills and environmental education of the inspectors


The project is planning to receive the following results:

1. The legitimate reserve boundaries will be restored;
2. The area of the reserve will be increased to 57 ha by joining neighboring areas;
3. The first bypass of 220 ha will be fully fenced with double-barrier;
4. The second, third and fourth bypasses with a total area of 875 ha will be fenced with ditch and in-depth channels and streams along the boundary;
5. Various types of violations of the protected mode will be prevented;
6. The degraded ecosystem of the forest area of the reserve will start to recover;
7. The level of environmental education of the population, which is surrounding the reserve area, will be increased;
8. The knowledge and skills of inspectors will be enhanced.

Unfortunately, how it has ended

After "TERRA" ecological center submitted a project proposal, and the GEF SGP provided financial support for its implementation, the project team has started preparation. However, it should be noted here that Deputy Director of the Reserve responsible for Science Marmazinskaya N., who was the core of the work on protection of the reserve, was fired from the reserve. She had to resign. Korshikov A. and Gritsina M., being one team, also submitted applications for resignation.

But the project has been approved and it should be implemented, the dismissal of the project team from the reserve could not be a reason for termination of the project. Although at that time it should have been a threatening warning.

Since the project was focused on building of a fence around the forest area of the reserve, the construction of the ditch along the borders and planting of thorny bushes along the for prevention of any physical penetration into the reserve territory, it was intended to construct a physical barrier, and hence mass of building materials - pipes, cement, barbed wire, etc. . According to UN procedures, a tender was announced and most of the construction materials that were needed for the implementation of the project were purchased to the amount of 30,000 U.S. dollars.

The construction works were to begin in winter, but because of the weather conditions they were postponed. In the spring of 2010, the project team wanted to start works on the construction of the barrier. The team arrived at the reserve for starting the works. However, the officials from the Administration of national parks, reserves and hunting farms in the structure of General Directorate of Forestry of the Republic of Uzbekistan, that were in the reserve, have prohibited the project team to carry out any operations. The project team was expelled from the territory without any explanations. The explanatory note can be found below.

- introduce with the explanatory note from the project team

- scanned and sent text with a stamp (Part 1)

- scanned and sent text with a stamp (Part 2)

After the incident, "TERRA” Ecology Center sent a letter to the Administration of national parks, reserves and hunting farms and a copy to General Directorate of Forestry of the Republic of Uzbekistan with a request to confirm the official position regarding the future of the project.

- introduce with a request letter

- letter from Administration about the start of the project

After the meeting of the leadership of “TERRA” with management of the Administration, we can only assume about what has happened. But after the meeting, the management the center TERRA demanded that the previous team consisting of Marmazinskaya N., Korshikov A. and Gritsina M. should be completely removed from the project. In other words, all those who created this project and worried about preservation of the remaining part of the living world in Zarafshan reserve, but whom the Administration and the reserve did not like, had to be dismissed.

The GEF SGP cannot be attached to persons and, although it was unpleasant, we agreed to continue the project with a new team, after receiving of the letter from the Administration that the project could be continued. Such a letter was received.

- introduce with the second letter from Administration

After that, we received several requests from the Terra center to modify the project budget and change the focus of construction. In the request, the Center asked to begin the construction on the 3rd plot of the reserve, which was opposite to the previous plan.

- request of the Center regarding the 3rd plot

As it was stated by the Center staff, these were recommendations of the Administration. However, there was no sense in these recommendations, because it simply contradicted with the logic of the project. From the beginning of the project it was supposed to construct a fence around the 1st plot of the reserve.

It was the first plot of Zarafshan Nursery where the highest level of biodiversity remained, and which should be protected first. The area of the first plot is the site of habitation of reintroduced group of Bukhara deers, which were to be continuously released from the open-air cage into the wild nature with the assistance of WWF program. The third plot is in the middle part of the reserve, and if the fence construction would be started from the third section, building materials, which were procured in the project framework, would be simply not enough for constructing a fence in the second and first plots. However, if the fence will be built along the border of the 3rd plot, i.e. in the middle part of the reserve, the efficiency of incomplete fence would be minimal.

Initially, the entire project was focused on the construction of the fences along the border of the 1st plot. On other plots it was planned to deepen and broaden the channels and canals, as well to dig ditches that would be an obstacle for penetration the protected area.

We expressed our position to TERRA Center about disagreement to change the project proposal in a private talk, but it seems the latter refused to continue the project probably not desiring to go against the Heads of the Administration, and we were notified about it, not even waiting for our official response.

- letter from TERRA center about discontinuance of the project

This is ho a wonderful project ended, that was intending to do something good for the wildlife of Uzbekistan. Nothing was done. All building materials were transferred to other projects of the GEF SGP.

The below mentioned is not our position and we cannot affirm, but the local residents, who spoke with the first project team, said:

"You are going to put a fence against us!" And most of what is taken out of the reserve by the local residents or outsiders, is being done with the consent of the reserve inspection. They are responsible for 70-80% of firewood cutting in the reserve, and of course it is not profitable for them if a fence is built!

Of course, this is guesswork of the local residents. But when the project is simply stalling and cannot be executed without any apparent reason, the project, which is evidently aimed at benefits for the reserve, one simply fails to understand why this is happening and only the bad thoughts come to mind.