On 24 February 2014, an open seminar for farmers took place in Tashkent and run jointly with the Michael Succow Foundation from Germany. Its subject was “How to create a plantation of pistachio cultivars - a new, economically-profitable
solution for effective land use in the dry-land zone of Tashkent province”. Besides an acquaintance of participants with technology related to starting pistachio plantations, the main goal of the seminar was to find candidates among the participating farmers who were interested in the potential creation of a “growth point” for pistachio cultivars in Tashkent province. The “growth point” is a centre for distributing pistachio-planting and grafting material, for conserving pistachio material gathered by specialist forestry workers in Uzbekistan, and for disseminating knowledge about pistachios.

Currently, farmers from Tashkent province have been selected and the project has been finalized; work on establishing the “growth point” will start in Tashkent province from 2015, with the assistance of the Michael Succow Foundation.
***
22 may - Biodiversity Day in Uzbekistan

This holiday gives us renewed cause to reflect on and ponder the question of why biological diversity is so important for human survival. The celebrations included a successful series of events dedicated to the subject of biodiversity. The series began in April with the announcement of a national competition for biology teachers entitled “Activities on national biodiversity for students”.
A forest dormouse.
The photo from materials of  GEF SGP database «The Fauna of the Nuratau mountains,
the south-eastern Kyzylkum and the Aydar-Arnasay system of lakes»
According to the rules of the competition, the activities and tasks for students were developed and prepared by making use of resources from the database “The Fauna of the Nuratau Mountains, the south-eastern Kyzylkum and the Aydar-Arnasay system of lakes” which was established during one of the GEF SGP’s projects. The competition was successful. Taking all categories of the competition together, more than forty submissions from all over the country were received.
***
The next initiative in the series was a successful national competition for photographers and nature lovers called “Photo Hunt”, held in May. Winners were nominated in five competition categories and were awarded prizes in a final event. You can find out more about the Photo Hunt competition and the winners’ work on our website, in the News and Photogallery section.
A photo submitted for the contest «Photohunt» in the nomination «Life is everywhere»
by Nataliya Shulepina.
***
Another good way of making people aware of the subject of preserving local biodiversity was an excursion that acquainted participants with two subjects: horticulture and fruit-growing in Uzbekistan; and forest trees and shrubs. This event was held in the place in the Research and Development Unit of the Horticultural, Viticultural and Vinicultural Institute of Uzbekistan named after M. Mirzaev (previously Shreder), and in the Republican Scientific-Production Centre of Ornamental Horticulture and Forestry.
Both excursions aroused a great deal of interest. Participants suggested that similar encounters with nature should happen more frequently. Given the high level of interest, we are planning to organize an excursion to one of the forest areas that are in the mountains of Tashkent province.
Tour participants on one of the experimental plot with drip irrigation
in the Research Institute named after Academician M.Mirzaev
***
Finally, the series of events was capped by a final informational seminar dedicated to celebrating the International Day for Biological Diversity 2014. UNDP, the GEF SGP, and partner projects in the area of the conservation of biodiversity were presented at the seminar dedicated to the International Day for Biological Diversity 2014. Participants in the seminar were able to discuss various topics related to biodiversity, including: bees and wild pollinators and the role of pollination in producing foodstuffs; the importance of increasing our efforts to preserve animals and plants in protected natural zones; involving private tour operators in protecting
ecosystems and biodiversity; developing aquaculture as a way of combating fishing in natural bodies of water; and many, many other topics.
The informantional seminar dedicated to the World Biodiversity Day
***
On 21 June, the SGP team, together with the Institute of Flora and Fauna Gene pool of the Academy of Sciences of the Republic of Uzbekistan and the Council of Farmers of Uzbekistan conducted a practical training course in Tashkent on the topic of “Trout farming - a potential business for the farmers of Uzbekistan”.
“There is a pond aquaculture in Uzbekistan that where carp, silver carp and grass carp are bred. Average multi-year yield is 1 tonne per hectare (or 0.07 kg per cubic metre). This technology can be improved if more carp are added and they are fed compound feed. In this case, yield can rise to an average of 2 tonnes per hectare (or 0.13 kg per cubic metre). We have intensive technology, and when we breed trout we can be certain to achieve 20-40 kg per cubic metre. Good ventilators are required to improve yield. This can lead to 40-50 kg per cubic metre,” according to the specialist working on the trout-farming project, ichthyologist Bakhtiyor Kamilov. 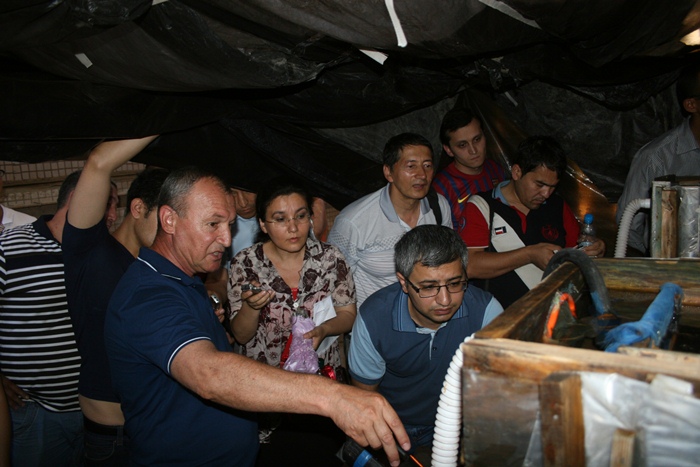 Participants of the training on trout in the hatching room
Download a guide on starting a trout farm on our website.
***
A seminar for farmers took place on 11 July 2014 in the town of Andijan. Its title was: “How to create a plantation of pistachio cultivars - a new, economically-profitable solution for effective use of dry lands in the Fergana Valley”.
A practical part of a seminar in Andijan. Demonstration of inoculation of a young pistachio.
Ibodat Yuldasheva, a participant in the seminar, shared her success story: “I realized the possibilities of cultivating pistachios after reading a journal article. Three years ago I planted 560 pistachio seedlings over an area of two hectares. I was afraid of losing the soil in the container which came along with the delivered seedlings, so they were planted right in their plastic containers. Of course, there were some losses, and many seedlings didn’t survive on the ‘big ground’ but anyway I managed to conserve and grow 437 young pistachio seedlings, and now they are almost as tall as a person. Recently, specialists from Tashkent conducted budding work on my plot and I now have 17 different types of pistachio growing on my plantation. In future, my farm can become a ‘point of growth’ where various farmers will be able to receive high-yield pistachio cultivars”.
***
Projects under consideration

1. “Using photo-electric sub-surface pumps to create a five-hectare pilot plot of pistachios and almonds in dry land making use of drip irrigation as an alternative to cattle”.
This project will provide a successful example of how it is possible to use the arid plains typical to Uzbekistan in a way that is naturally sustainable and profitable to the local population, in this case by planting trees.
2. “Establishing a biotechnology centre to create seedlings of endangered and rare trees in the conditions of in vitro for the farmers of the Fergana valley”.
In vitro conditions are a method of acquiring a clonal generation of chromosomes from certain growth organs (apical buds, leaves, stems, roots) by using special laboratory apparatus.
The goal of the project is to create a biotechnological laboratory which, by making use of in vitro technology, will soon produce and distribute high-quality seedlings of species of tree, taken from trees that have not fallen ill, with instilled immunity to locally occurring diseases.
3. “introducing planting techniques that do not involve tilling the soil for multiple crops after winter wheat in irrigated lands in the lower Amu Darya river”.
The project intends to demonstrate a non-traditional method of cultivating multiple crops (without the traditional tilling of the soil) with the following fundamental features: preparing a bio-humus by composting agricultural by-products and sewing crops without working the soil.
4. “launching a renewable fund to carry out anti-filtration measures in the Yangiaryk district of  khorezm province in order to reduce water loss, to resalt soils and to adjust to water deficit conditions in a world affected by climate change”.
This project intends to show how minor investments by state agencies or financial entities can heighten the effectiveness of irrigation, reduce the cost of agricultural production and increase its production capacity and yield.  Furthermore, it will be demonstrated that the services of Water Users' Association in delivering water can be and are a fundamental factor in agricultural production.
5. “demonstrating and introducing soil-preserving technologies for managing agricultural crops in the conditions of salty soils of  Fergana province”.
This proposed project is intended to demonstrate and introduce soil-preserving technologies to manage agricultural crops and implement them on a large scale, including the use of green manure, minimal and zero tillage of soil, thus guaranteeing that land is used more effectively and improving the structure of salty and impoverished soils, such as in the farms of the Yazyavan region of Fergana province.
***
Three publications/manuals for farmers on technologies promoted with the assistance of the GEF SGP have been prepared and published, including:
1. “Seven steps to independent use of laser equipment to plan irrigated land”;


2. “Beekeeping for dummies” and


3.  “Trout breeding in the conditions of Uzbekistan”. 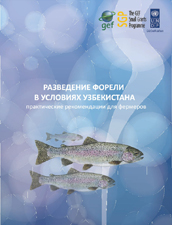