Main > Projects > Biodiversity > The project on the expansion of Djeiran ecocenter

The project on the expansion of Djeiran ecocenter
Completed project

The full name of the project is “Biodiversity conservation and rehabilitation of desert biomes with development of ecotourism and education on the South-West part of the Kyzylkum desert”. This is an exact name of the project which means a lot of interesting and splendid work for improvement of the situation with biodiversity being protected by ecocenter Djeyran.

More than 30 years ago ecocenter “Djeyran”  was created (nursery) for breeding rare and vanishing species and breeding of djeyran gazelle which was included into the International Red Book has become the most successful. During this period ecocenter “Djeyran”  has been recognized as one of the effective centers of breeding rare ungulate animals. Viable populations of djeyran gazelle (Gazella subgutturosa) were created, which is a vulnerable and reducing subspecies, were created; of wild donkey (Equus hemionus Pallas) which is a species vanished in the wildlife; and Przewalski's horse (Eguus przewalskii) which is also a vanished species in the wildlife (the world number is about 3000 head). 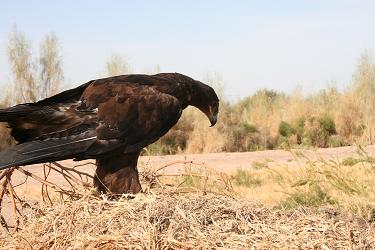 Ecocenter “Djeyran”  is a home to Lacha eagle-hen and for many other species of plants and animals.
Unfortunately, the eagle-hen died by the time of completion of the project, but everybody still remembers it
Photo: Timur Kaysarov

The territory that was used by ecocenter earlier was equal to 5,145 ha. As observations of ecocenter scientists have shown, at this stage this territory does not meet the life requirements of the animals being bred. In consequence of the high number of ungulate animals in the enclosed plot, the degradation of the plant associations is occurring, which leads to the impoverishment of the feed resource and as a result it leads to reduction of the populations of the species bred. It was noticeable even during the project activity:

As you can see, the number is fluctuating. The biggest problem is the growth of the populations of wild donkeys and Przewalski's horses. It cannot be called a problem because it is good when the population is growing. However, together with the growth of the population of these species, forage reserves were lacking more and more within the closed territory of ecocenter of 5 thousand hectare. New lands were needed. The animals could not be moved out into the wild environment of other areas of Uzbekistan, we simply have no any other secured desert territories in our country besides the ecocenter. It is surprising, isn’t it? In the country, where 85% percent of the territory are deserts and semi-deserts, there is no any really working desert secured natural territories!!! And it is still dangerous to set free the animals to the unguarded environment. Consciousness of people is still not able to understand it – the animals will be killed immediately.

Within the framework of the project that was submitted to the GEF SGP and then accepted, it was planned to join additional 27,350 ha to the ecocenter. If possible, to make preparations for the creation of the first desert national park of the country. The objective of adding the territory is conservation of biodiversity of the territory and increase of the population of djeyran gazelle, wild donkeys and Przewalski's horse on this plot of the Kyzylkum desert.

The new territories require new financing. Steady existence and financing of ecocenter were planned to be achieved due to a number of the project measures. Of course, the support of the nursery work from the part of the State Committee for Nature Protection remains the supreme one. But besides, the following was planned by the project:

1. To develop a plan of managing the ecocenter which along with other points, would include the activities of the ecocenter directed to receiving of additional financial funds for the nursery maintenance.
2. Creation of the first ecotourist product of this kind in the Republic – the accompanied excursions along the area of the attached territory of the ecocenter where the visitors can see the real wildlife of the desert. Of course, the profit from this activity would go to the budget of the ecocenter. It will be a kind of “Uzbek safari”.

It is pleasant and necessary to note that the applicants and initiators of the project are young people who are not indifferent to the life of the ecocenter and the whole nature! They are Valentin Soldatov – son of Natalya Vasilyevna Soldatova, a deputy director of the ecocentre; Anya Ten – an ornithologist, a member of the society for protection of birds of Uzbekistan; Timur Kaysarov – a young biologist and a nature lover. And the supervisor of the work is Nataliya Vasilyevna, deputy director of the ecocentre. There is a special story about Nataliya Vasilyevna. Maybe most of you have seen the film “Three Natashas”, and those who hasn’t, can learn about this film from us. If you write us, we will send to you a copy of the film.

So, the expansion of the territory of the “Djeyran” ecocenter was announced as the objective of the project for conservation and maintenance of the viable populations, species of wild ungulate animals being bred, and arrangement of the effective system of managing the expanded territory. Along with this work the young initiators of the project have considered that the ecocenter, like any other Specially Protected Natural area, besides the objectives of nature-conservation, should serve the objectives of researching the processes in the nature. In this connection, it was proposed to create a field camp for the research works of the students, in the framework of the project, as a lot of students from different institutes, including foreign ones, come to the ecocenter for carrying out their scientific work. Moreover, many young nature lovers from all over the country take part in the annual registration of the inhabitants of the ecocenter.

You can introduce with the text of the project document.

It is pleasant to note that the beginning of the project work has served as a push for involving to this work of many other partners and nature lovers. Thus, Shurtan oil-processing plant has undertaken to build an enclosed complex within the newly attached territory. I fail words to express our thanks to the direction of the plant and especially to Alisher-aka. By the end of the project the works on building of the enclosure was being continued. A wonderful enclosed complex was built. In the framework of the project it was planned to place a part of the animals there but as the works were still on, it was decided not to risk the animals and let them in only after completion of the construction. It is good that the first animals have already been set free.

The obligations to provide the enclosed complex with water, to build the observation posts, inspection cordons, including the construction materials and labor work, were undertaken by the Navoi Mining and Metallurgical Complex. Rufford’s Fund has also joined the work and promised to provide the equipment for students’ field camp. To our great regret, the field camp has not been built in the framework of the project.

I should say that by the end of the project many things have been done:

• Bukhara regional administration signed the documents for getting the area of 9,300 hectares and cadastral documents for this territory have been received;

• registration of 4000 hectares is still underway;

• On 17-19 April 2009 the action of cleaning the project area was held, which was attended by the activists of the Youth Ecological Network of Uzbekistan from Tashkent and Samarkand and the students Bukhara State University cleaned the banks of the pond (wells) which serve as watering place for the wild population of djeyran, as well as dumps along the route Bukhara-Karshi;

• After the action the grader cleaning along the road was conducted by the Ecocenter;

• The works on making up the Management Plan are being continued: the structure was worked out and the materials on the basic information about the Ecocenter were collected – the natural values, socio-economic conditions and management of the Ecocenter;

• A fundament for the GIS database on Landsat 2000, covering both project and adjacent areas, was prepared and it also includes information on ponds, roads, settlements;

• The structure of the ecocenter website has been developed. The materials have been prepared and some of them have beenalready available on the website. The site was registered under the domain www.ecocenter.uz

• And very much more, including purchase of the equipment for the activities of the ecocenter.

On October 3, 2009 the annual registration of the number of animals in the Ecocenter was held. The accounting caused a wave of creative enthusiasm among the participants. Firstly, there was an article on the website of the Youth Environmental Network (by Alexandra Povarich). Then the National Coordinator of the GEF SGP made an effort and also wrote a note about the registration. Then guys wrote another few stories. We share them with all the readers. Read them below:

- read the story of its main person Natalya Vasilyevna

- the story of freshman Vladimir Shipilin

- "Contrasting colors of the desert" by Lida Shinas

You can read the final report of the project here. We hope for further work, which will help more to preserve the unique biodiversity of the southern Kyzyl-Kum desert.