Project on restoration of relict pistachio woodlands in Kuruksay canyon

The project title speaks for itself – the project is intending to restore woods on their early habitats – within the territory of Kashkadarya region in Kuruksay canyon. Here you can still find some pistachio trees which are around 1500 years old and they are still bearing. But there are only few of them now, while formerly there were the woods there. 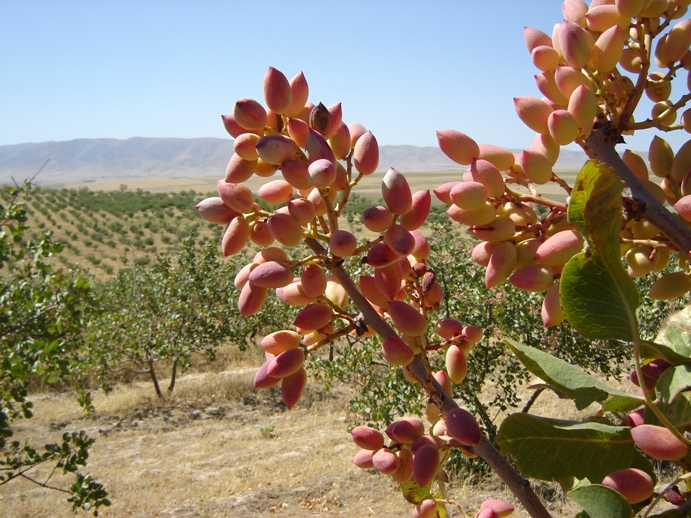 
We must somehow restore the former beauty. An idea of the project came to our mind and we found volunteers who agreed to work on the project and help to implement it. They are Bakhrom Karabaev and Taras Jukanin.


The project began from the discussion on our website but unfortunately it wasn’t so fruitful… Anyway, we started the project.

What this project is going to do? It consists of several parts:

Planting of the pistachio trees

There were a lot of pistachio trees here. But very few of them remained. Some rare parts of them remained on very steep slopes where felling is quite difficult, and there are some old trees in the village which remained for some unclear reasons. As the foresters say, the trees are nearly 1500 years old.

It often happens that people see that a tree does not bear fruits. They think that it is useless. It should be cut down for firewood. But pistachio is a dioecious plant. Its pistils and stamens are separated… If a tree with the stamens is cut down as it seemed to be not bearing, then the pistil cannot survive alone… who will pollinate it? So everything is cut down in chain…

Therefore, firstly the project decided to spread knowledge among locals on planting pistachio, i.e. tell them how to do it, how to care etc. Thanks God, we have already had a pilot project and many things were done within its framework.

Firstly, we called the residents in the local school, told them everything about pistachio and asked them: “Who wants to plant pistachio?” The first volunteer who will plant 1 seedling will be granted one more seedling free of charge. There is one condition – the place of planting should be fenced from the cattle. The livestock is the first enemy of young pistachio, exactly because of the cattle pistachio cannot restore naturally.

There were a lot of volunteers. But when we started to plant the number of interested people considerably decreased. At the beginning of the project only 6,5 ha were planted. But when the people saw that the project really plants, the number of those who wanted to plant pistachio around the village again increased… Well, let’s see what will happen in autumn and next spring… The seedlings of almond trees will also be planted together with pistachio trees… they grow faster and people could get profit from the almond until pistachio grows up.

The restoration is one thing. It is very important not only to plant it again but keep it from repeated felling. One of the means is to show that planting pistachio is economically profitable. Seriously profitable. The second means is to eliminate or reduce the reason for felling.

Everything was cut down for firewood. People need firewood for warming up their houses and preparation of food. Therefore, one part of the project will be directed to the supply of people with firewood. We will try to create plantations of fast-growing trees which people can use as firewood. They will grow up these trees, cut them down for firewood and do it in a circle. It is absolutely neutral from the point of carbon effect on the atmosphere, as the amount of carbon absorbed by the tree is the same that will be given back during its burning.

It was found that the best suitable culture for this procedure was oleaster. So we decided to plant it this autumn.

One more method of reducing the pressure on natural vegetation is to reduce the demand. In our case it means to reduce the consumption of the firewood. How could it be done? We will try to introduce simple and cheep ovens of different types for heating and preparing food. The local experts will be taught to make such ovens and will construct them for the local residents.

When we came to Kuruksay settlement for the first time, we saw that it is a wonderful place. People should see this place. The more people we be attracted here, the more profit will be got by the locals, which means that a part of the locals could switch from the stock-breeding to the tourism. Besides, as many local people could earn by tourism, the people may have stimulus to keep everything around in a possibly better state. Therefore, the project decided to help in development of the rural tourism in this settlement.

If you want to know about the development of this direction then keep an eye on our news.

So, these are the aims of the project.

If you have any questions and recommendations, you are welcome.