Currently, two main crops are existing in our country, which almost all the farmers work with on irrigated areas. They are cotton and wheat. Unfortunately, the widespread use of cotton and wheat only for a long time causes loss of soil fertility: the level of nutrients and organic fertilizers in the soil has significantly dropped, many ecological processes in the soil have become abnormal, fertility decreases, which ultimately leads to fall of the crop yield.

The normal planting scheme, used by farmers of the country, is done in the following sequence: 1 year - cotton, 2nd year - cotton, 3rd year - wheat and another year - wheat. In other words, each major crop grows in every field at least 2 years. 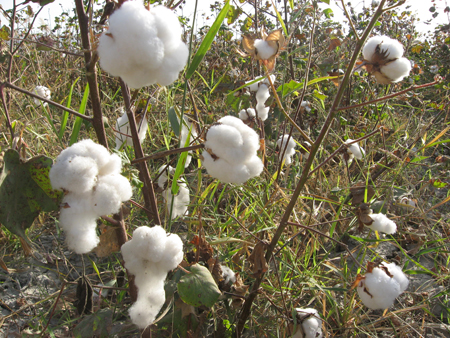 After 1 year the cotton significantly overcrops the soil, taking phosphorus and nitrogen from the soil. Planting cotton in the second year, the pressure on land, which is already exhausted, increases. After harvesting, the land is practically not sown and unprotected from the summer heat, and due to high evaporation of moisture from the soil surface, it quickly becomes saline. Evaporation from the soil surface reaches 1,5-3,0 thousand m3/ha per month, and this means drawing of over 20 tones/ha of salt during the summer period to the root zone, salinity of subsoil water being 3 g/liter.

Unfortunately, the farmsteads rarely apply new agricultural technologies and innovations in the field of agriculture, they continue growing cotton and wheat with the help of old technologies of cultivation and irrigation techniques. Therefore, the problems of irrational use of the land and water, the secondary salinization, the drop of soil productivity remain.

What can be done?

One of the best options in solving the problem of soil degradation, irrigated and used in a turnover, is its protection with vegetation cover. Such a method is proposed by the team of specialists from Tashkent Institute of Irrigation and Melioration (TIIM) under the leadership of Shurova Ludmila Georgievna. The method consists of introduction of annual legumes into the existing crop rotation of cotton-wheat. The method is called as combined and intermediate crops. This is basically a new system of soil protection that is very productive in fertility improvement, water preservation and increase in forage reserve for cattle breeding.

The suggested method of improving the organic matter content consists of the following:

Firstly, we sowed cotton. Then we gathered in the harvest of cotton. The soil is exhausted. After harvesting the cotton we sowed a triticale+peas (a legume-grass mixture that also can be in other variations). The mixture feeds the soil with organic fertilizers thanks to growing of the root system and continuing ploughing of plant residues and also gives sufficient fodder yields in the amount of up to 100 centners from 1 hectare.

Next, in spring, the Lucerne is grown in the wheat field, which also enriches the soil with organic fertilizers through the nitrogen fixation and existence of plant residues. The Lucerne is planted in spring in order not to oppress the main crop (wheat). After harvesting the wheat, a farmer gets 2 crops of the Lucerne and the soil gets fixed nitrogen, organic fertilizers in the form of branchy root system and permanent vegetation cover that decreases the evaporability of the soil moisture and low salinity of the soil. Again, winter wheat is planted in winter.

Harvesting of the Lucerne takes place. The sowing of the cotton takes place and the scheme continues, starting from the first stage.

Therefore, without violating the requirement to sow the basic plantings (cotton and wheat) we help to hold phyto-melioration of the soil and enrich it with organic matters with the help of extra crops sowing that give additional revenue to the farmer and give benefits for soil. Besides, the water is saved due to decrease of soil ablutions that are replaced by watering the Lucerne.

This method was demonstrated at the First Fair of Innovations and was supported by the leaders of the country for the approbation and wide introduction. The current project sets the task of testing this method in the scale of farmsteads in the territory of Karakalpakstan for further expansion in the other regions of the country.