How to improve soil fertility?

The peasant farm was established in 1991, its activity began from 3 hectares.

Soil quality deteriorates every year. Humanity exploits the earth in order to obtain the products it needs. The problems of growing agricultural crops are solved by various types of soil cultivation. Unfortunately, mechanical soil cultivation leads to the destruction of soil biota, a decrease in organic matter, destruction of the soil structure and its erosion. And as a result, the soil loses its "health" and becomes less productive. 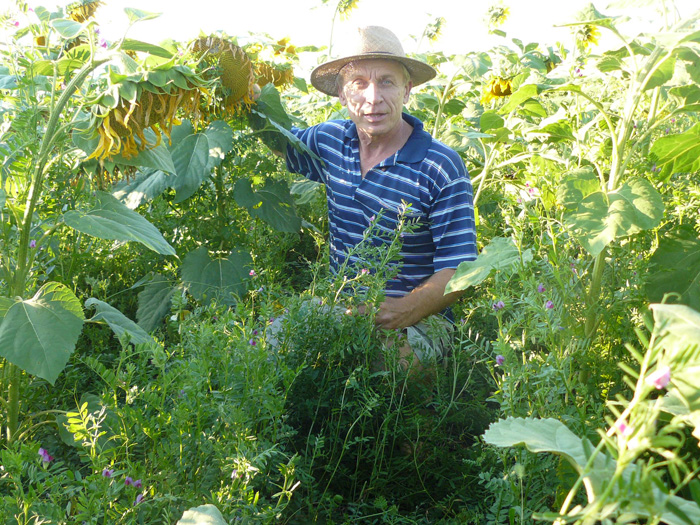 M. Draganchuk in his field demonstrates the combined (binary) sowing of sunflower with sainfoin. An excellent biomass grows under the sunflower - "food" for the soil.

In order for an agricultural business to be profitable, a farmer has to face a number of problems:

All of these points are extremely important to business efficiency.

However, in the modern agricultural business, the priority is the problem of preserving the main capital of this business - the soil. It is the fertility of our soils that will determine what product we can get from our lands, its quantity and quality. This, in turn, will affect not only the quality of life of farmers, but the whole of society.

Thus, to preserve the soil, you need:

- stop soil erosion (wind and water);
- reduce the density of the soil;
- improve its structure;
- keep more moisture;
- to increase the amount of organic matter in the soil.

How can this be achieved? - Very simple! To do this, the farmer needs:

- stop mechanical tillage;
- plant residues should not be embedded in the soil, but mulched and left on its surface;
- keep all the moisture falling out in the form of precipitation
- to reduce the number of operations in the field, which reduces soil compaction.

The following table will help you understand how each of the above steps can help you solve soil problems.

All these tasks can be solved through the transition to zero technology.

No-till is an abbreviated name for zero-technology in crop production, in which seeds are sown in the soil that has not been subjected to any treatment.

When the soil remains intact and covered with plant debris, the abundance of all types of soil organisms (from microbes and fungi to arthropods) increases. With more organic matter and better infiltration, no-till conserves the soil.

That is why this technology has spread so widely around the world over the past 20 years. Find at least one more technology that is more soil-friendly! It is zero technology that is the most effective way to prevent soil degradation and restore its productivity.

If at the first stage of mastering this technology, farmers solve the problem of protecting the soil from erosion and preserving the existing level of soil fertility, then in the future, the task of increasing soil fertility becomes a new priority in their work.

Scientists around the world are paying attention to one of the main reasons for the decline in soil fertility:

Continuous tillage over a long period of time destroys bacteria and microorganisms that convert organic matter into nutrients. "

from the University of the Witwatersrand (South Africa)

Therefore, in order to effectively work to improve soil fertility, you need to turn your attention to microorganisms that live in the soil. 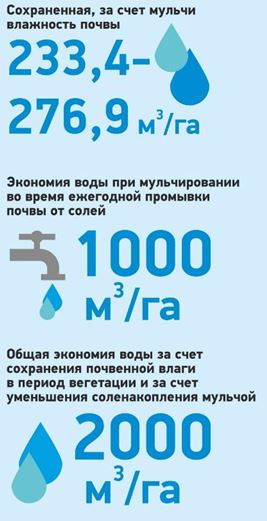 When, during the development of zero technology, we stop disturbing the soil cover and leave all plant residues, very favorable conditions are created on the soil surface for the development of soil biota, which contributes to soil restoration. But when we harvest the cultivated crop, soil bacteria lose their source of nutrition, as they feed on the readily available carbon that the living roots release during photosynthesis. So, the process of development of soil microorganisms slows down until the next year - until the next cycle of growing cultivated plants.

If we want to not only preserve the existing soil fertility, which in itself is the number one task for many farmers, but rather increase its level, we need to literally feed the soil biota during a period when commercial crops are not grown in the field. What is needed for this?

To do this, you need to always have living roots in the soil, and on the surface - a permanent vegetation cover or, in extreme cases, mulch. For this purpose, cover crops should be sown every year after the main crop is harvested. On dry land, plant residues must be crushed and left in the form of mulch on the surface of the field. 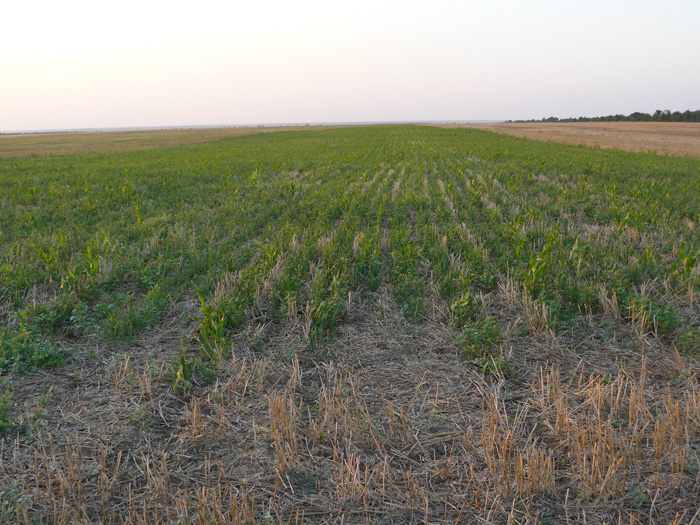 Cover crops have many properties that are very important for soil fertility. They are capable of:

- to increase the content of organic matter in the soil, which contributes to an increase in the content of organic carbon in the soil;
- to increase the number and activity of beneficial soil organisms;
- to accumulate plant residues on the soil surface;
- to loosen and improve the structure of the soil;
- improve air and water conditions;
- to increase the water-holding capacity of the soil layer;
- to produce nitrogen by biological fixation (legumes);
- restrain the development of weeds;
- protect the soil from soil erosion (water and wind) and overheating;
- circulate nutrients in the soil;
- trap snow and other precipitation;
- to simplify problems with pests and diseases.

The soil surface should never be bare! 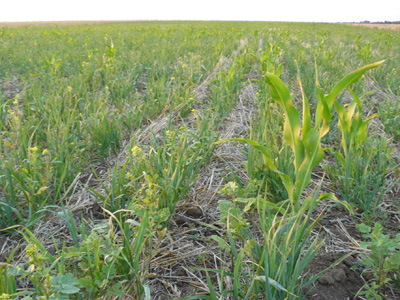 Although cover crops (green manure) are just one of many elements of No-till technology, this element must be prioritized to increase soil fertility. Working on it, you can get the fastest results, since growing cover crops will entail changes in the entire No-till system: it will tighten such elements as "crop residues", "weed control", "soil moisture", "nutrients", " crop rotation ”, and will make this system more balanced and harmonious. 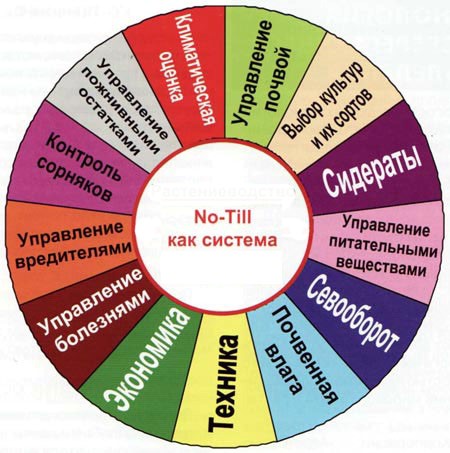 Including cover crops in the crop rotation, there are many ways to go. These can be both mowing crops1 and binary crops2. Cover crops can be grown both in monoculture and in mixtures (so called “cocktails”), which is an even better alternative. But with all these possible options for growing cover crops, the main principle must be observed - there are always live roots in the soil, and on the surface there is a permanent vegetation cover. 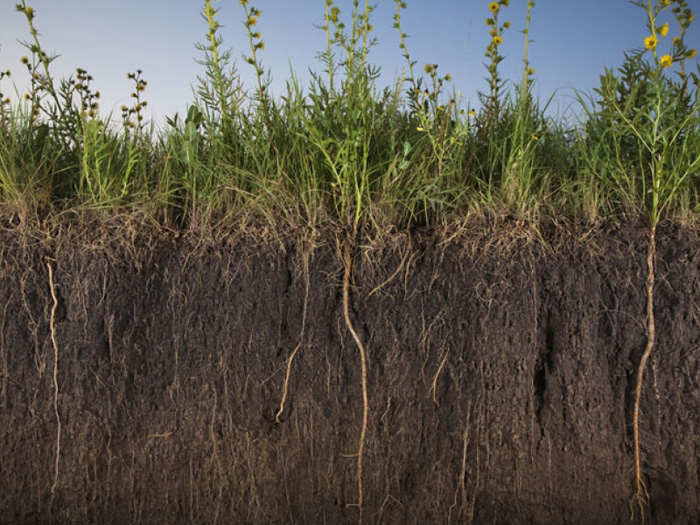 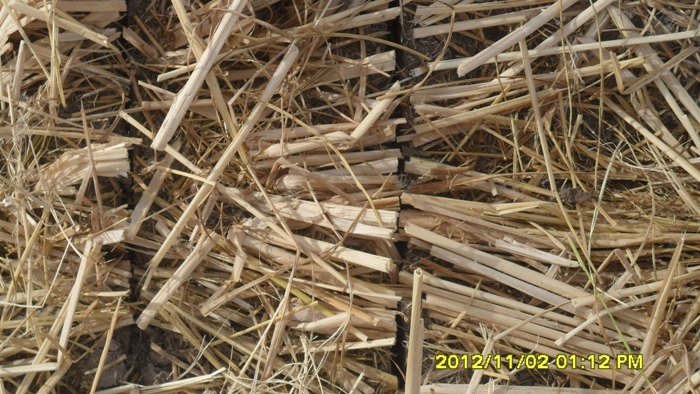 This is how a zero-seed drill works.

The disc coulter cuts crop residues and sows seeds next.