Namangan children are against climate change 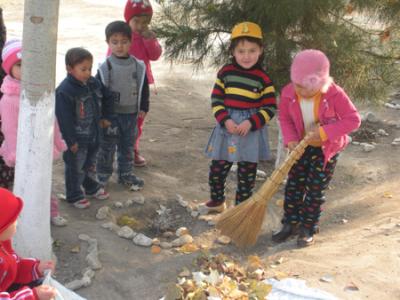 Do children need to be educated from the early age to care the nature? Protect their houses? World around us? This question is affirmatively answered by the project in Namangan.

The project is simple in its idea - try to teach children and their parents to treat carefully the world around us. How we can do it? This can be done only in their language.

Therefore, the project was built this way. First of all, the project that was executed by "Mahalla" Fund of Namangan district, Namangan region, was planning to prepare and stage a puppet show. The play was prepared on the topic "how we handle the trash around our homes, in the communities. The play was first shown to the children on Feb. 25, 2010.

The performance was staged by the actors, working in the local cultural centre. The play consists of a story, interesting for children, showing how children and adults treat the rubbish every day, and how it affects us all. The idea is that the children could understand by themselves what is good and what is bad, and try to translate these models into their behavior in the future. The plot is based on the national traditions. The play is staged in the Uzbek language.

The play was aimed at the children living in 10 mahallas of Namangan city. We hoped that the performance could be watched by more than 1000 children from 6 to 12 years old. Unfortunately, only about 400 children could see the show. After finishing of the project all the puppets and the script of the play remained in the inventory of the cultural centre, and we hope that it will continue staging this show for mahallas of the town.

The project also tried to attract children's attention to this issue through the contest of drawings held in each mahalla of the project. Such activities, held by the mahalla committees are important elements in establishing direct communication between members of the community.

The project also planned to hold a series of activities for promotion among the residents of the ability to make and use compost pits for disposal of organic waste. The fact is that organic waste is laying and being decomposed in heaps and in dumps, methane is emitted into the atmosphere which is one of greenhouse gases and which is changing the climate on our planet. If the garbage is processed properly, the methane emissions can be avoided. However, the project did not have enough time and effort to complete the work begun. Many residents have long been engaged in composting garbage, but we failed to attract new ones to this business.

The idea of composting pits is old and very practical. Organic waste, which often spoils the look and the health of our country, can be turned both for benefit of the nature, and also for benefit of the people by themselves, if turned into fertilizer. This can be easily done by making compost pits. These pits do not require any significant investment, except for investments of time and little space. The project planned to make such pits in each of the 10 mahallas, together with all residents of the mahalla, together with the children. The pits can be individual or shared.

The project was to prepare a small instruction, a booklet for others saying how to do such pit in one’s place, but has not completed its work.

download draft version of the booklet of creating the compost pit